Our esprit-de-corps gives our school a special sense of community.

At the centre of our ethos is the core value of citizenship and this is achieved in many ways from weekly assemblies celebrating achievements to our highly competitive houses: Comgall, Gall, Ultan and Lorcan. Students in all classes are assigned a house when they begin Year 8 and they remain a member of this house throughout their time at the College. Families are usually in the same house and much of the sense of competition comes from the highly competitive parents and grandparents who often take to our Twitter and Facebook House Pages to show their sense of competition! Points are awarded for a range of competitions: sporting, poetry, musical, film, photography – everyone has a chance to be a vital asset to their house!

Aims of the House System:

There are four houses consisting of a mixture of students from across year groups, including all teaching and support staff.

Students will be awarded House points for participation and performance in a variety of activities and competitions, including sporting events and curricular activities.

History of the Houses:

The four houses at Slemish College have been named after four Celtic Saints – Comgall, Gall, Ultan and Lorcan.

Our house is named after St Comgall. Our house colour is yellow and our symbol is the fish. St Comgall was the founder of Bangor Abbey – the most influential of it’s time. He was born in Magheramorne, near Larne, somewhere between 510 and 520 AD. Comgall seems to have served first as a soldier, and on his release from military service he is said to have studied to become a monk. He intended to go to Britain, but was dissuaded from this step by Lugidius, the Bishop who ordained him, at whose advice he remained in Ireland and set himself to spread the monastic life throughout Ireland. The most famous monastery founded by Comgall was Bangor, on the Southern shore of Belfast Lough and directly opposite to Carrickfergus. He is said to have been the friend of St. Brendan, St. Cormac, St. Cainnech, and Finnian of Moville. He died in Bangor, the place he loved, between 592 and 602. The Coat of Arms of Bangor, includes fish, and we have a fish as our symbol in honour of St Comgall’s Monastery at Bangor.

Our motto is - We build Upon the Rock.

It reminds us that we can build on no firmer foundations that those of the teachings of The Rock – Jesus. Comgall was a church planter – and Jesus referred to the church as, our Rock. 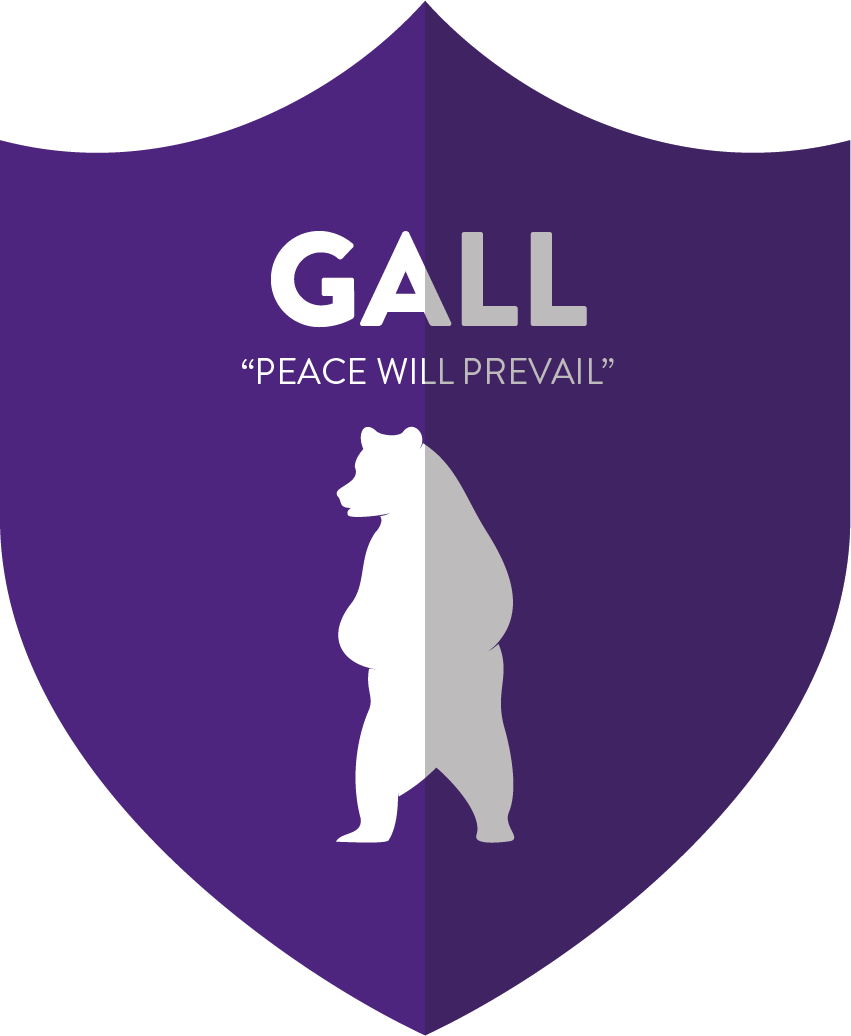 Our house is named after St Gall. Our house colour is purple. Our house symbol is the bear. Our house is named after St Gall – who was born around 550 A.D. He spent much of his life as a missionary in Europe, spreading the message of Christianity. St Gall’s Abbey, is a famous monastery in Switzerland. He died in Arbon, Switzerland, in 646. St Gall was widely known as a peacemaker. A popular story about St Gall has it that, at his command, a bear brought wood to feed the fire which Gall and his companions had kindled in the forest – which is why our symbol is the bear. At Slemish, Gall students tend to be brave! They love to encourage friendship.  They tend to like to take part in any challenge. Gall students love to travel and explore.

Our motto is - Peace will Prevail!

This reminds us how important Peace is in any society at any time. It reminds us that Slemish College, itself, is a sign of peace and our commitment to the new, peaceful future of Northern Ireland. 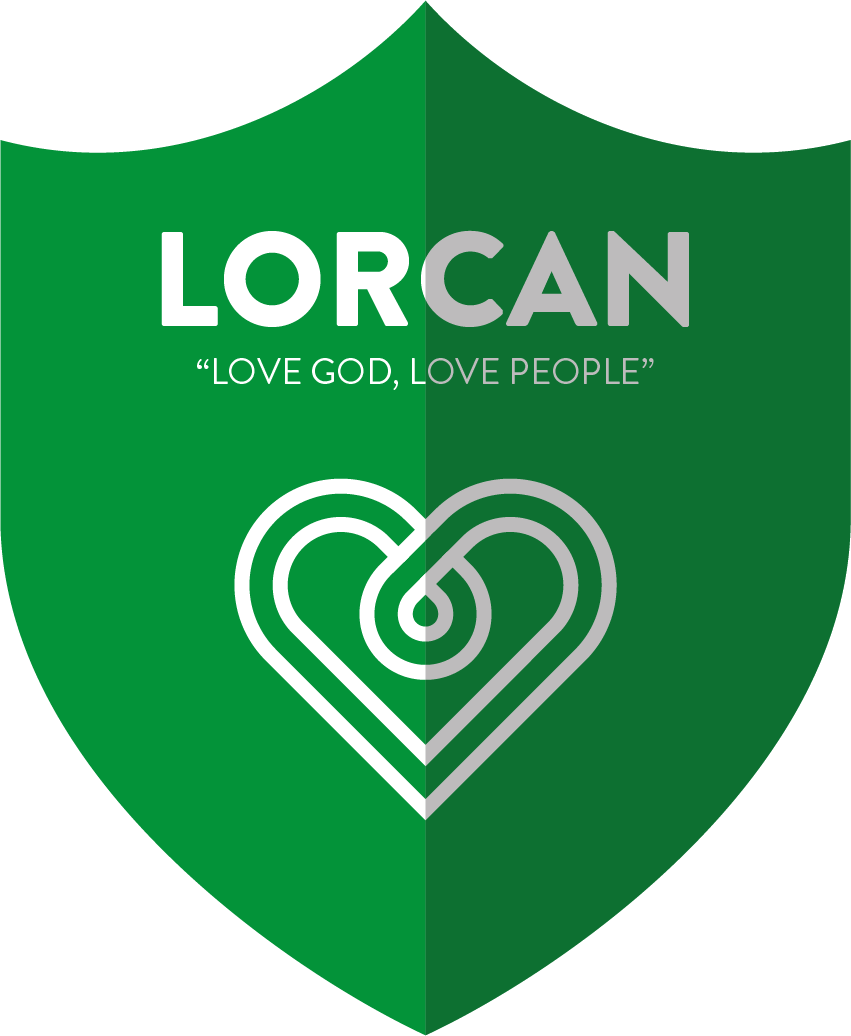 Lorcan house is named after St Lorcan, who is also known as St Laurence O’Toole. Our house colour is green and our symbol is the heart. Lorcan was descended from Irish Royalty – the son of an O’Byrne Princess. He was born at Castledermot in 1128 A.D.  As a child of 10, Lorcan was held as a hostage during a dispute between warring groups. This experience led him to want to enter religious life. He became Abbot of Glendalough at the age of 26. By 32, Lorcan was Archbishop of Dublin. He was a great leader. He rebuilt Christ Church Cathedral and was much loved by the people of Dublin. He was a great mediator who brokered peace between enemies. He died in France in 1180 A.D. St Lorcan never ate meat and always fasted on a Friday. He lived simply himself– but always gave the best of fare to his guests. He believed in practising the best hospitality and treated every guest as a king! St Lorcan’s heart is preserved in Christ Church Dublin. We feel this is one reason why the heart is our house symbol. Another is that he loved people and he loved God. At Slemish, Lorcan students are great friends to others. They also love being with other people and are known for their kindness. Lorcan students are great leaders.

Our house is named after St Ultan of Ardbraccan. Our house colour is red, and our symbol is the swan. St Ultan was born in 657A.D. He loved learning and made it his life’s work to found schools and educate the poor. Ultan had a deep love and care for the poor, especially orphans. Ultan also loved literature – especially poetry. He wrote beautiful hymns. He was a gifted artist who illustrated many holy writings. St Ultan was the Uncle of St Brigid and was a collector of her writings.

He was Abbot-Bishop of Ardbraccon and was probably Bishop of Meath. Our symbol, the swan, is a symbol of poetry and literature. It is a beautiful creature, and Ultan appreciated the beauty of nature. At Slemish, Ultan students tend to be very creative – in Music, Literature, Sciences and the Arts. They love outdoors and always enjoy competitions. They are very generous students, and like the swan, are very strong.

Our house motto comes from the opening line of one of St Ultan’s most celebrated hymns – ‘Christ on our Island.’

It reminds us of the deeply Christian Heritage of Ireland, and that Christianity is just as important to Ireland today, as it was in the time of our St Ultan.